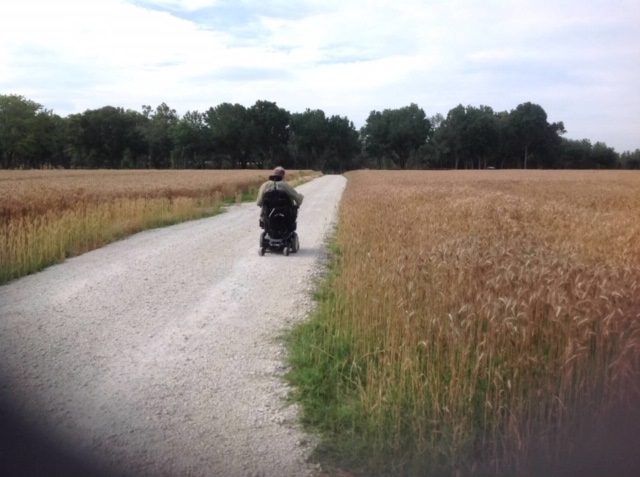 Scott Coleman figured he had a story to tell.

The longer he lived, the more the story took Coleman out of his comfort zone as a successful financial advisor with a loving wife and a comfortable home adjacent to the 18th green at an Olive Branch golf course.

On a warm June day in 1980, Coleman, who was 17 at the time, broke his neck in a skiing accident at Sardis Lake, an accident that led to months of rehabilitation. He remembers being one of 18 quadriplegic patients in the hospital. Of those 18, he says, only he and one other are still alive.

It was time to let others who may be in similar circumstances know there is hope.

So out of his trials and tribulations was born “Best when Broken” (WestBow Press, $30.95/hardcover and $13.95/paperback), which has opened doors Coleman never thought possible. The book has led to countless radio and TV interviews and new friendship with such people as Joni Eareckson Tada, founderof Joni and Friends International Disability Center. Tada has been wheel-chair bound since a diving accident in 1967.

“My aspirations were never more than to go to Kinko’s and make about 50 copies,” Coleman said of his book. “I was writing it to say thank you and as an expression of my faith, the grace of God, my family and my friends for sticking with me through thick and very, very thin. I mean, I love what I do. I’ve had a great life. I love my investment business. I was doing this because it was time to do it.”

What started as a small project has taken on wheels since it was published late last year. Within a week after it was published, more than a thousand messages had been posted on Facebook. Some came from friends Coleman had not talked to since grade school when he was growing up in Whitehaven. He recently spoke at Hope Baptist Church in Olive Branch.

It has all been overwhelming for Coleman, who had just completed his junior year at old Memphis Prep when he and some buddies decided to go water skiing at Sardis Lake’s Lespedeza Point, one of their favorite skiing spots.

Life had been good for Coleman.

At the time of the accident, Coleman remembers lying face down in the water, thinking he had never felt closer to Jesus. He tells in the book of the ambulance ride to Memphis and not knowing if he would live or die. Of how his parents were there throughout the whole ordeal, making all the right choices. Of how his friends showed up at the hospital, wanting to know how they could help.

“The very first thing they wanted to do (when he left the hospital) was they wanted to take me camping at Sardis Lake where I’d broken my neck,” Coleman said with a laugh. “These guys came into my home, looked at my mom and dad and said, ‘Scott’s not a baby. You can’t keep him under roof. We want to take him to Sardis Lake. Teach us how to cauterize him and take care of him.’ These guys volunteered to do all of it.”

When he started writing the book, one of his primary purposes was to point the finger away from him and toward God. He said it would be difficult to write a story about his life and make the point that it wasn’t about him.

He still cries when he tells of the grace of his friends and family, especially his wife of 26 years, Linda, whom he has known since they were in the first grade and who is featured in a photo with her husband on the back cover of the book. The book, Coleman says, has humbled him.

“All my friends were worried about me when I was writing,” he said.

Even Linda was worried.

“I’d start to write and I’d have a memory and I’d start to cry,” he said. “I’d pull away from the desk and just cry. Frequently a friend would call and say, ‘Scott, you do not have to do this.’ Or, are you OK?’ I’d tell them I’d never been better.”

“Best when Broken” is available through Amazon.com, Barnes & Noble and Lifeway book stores. There is also a blog at bestwhenbroken.com. A book trailer is being developed. He has had a couple of movie production companies request books as well.